George has worked in academic libraries since 1997. First as a GRA for Government Documents and a student worker in periodicals. He served as a Reference Assistant in the Johnson Center Library from 1999-2004. He was appointed as the Multimedia Librarian and the Liaison to Interdisciplinary Programs in 2004. Later he served as the liaison librarian to the history department  between 2004-2007. From 2007-2012 George was the Head of the Johnson Center Library. George left George Mason to serve as the Library Coordinator at Germanna Community College between 2012-2014. He returned to Mason in 2014 as the Liaison to History. George currently splits his time between the University Libraries and as an Assistant (Term) Professor for the Department of History and Art History. George also is the inaugural Director of the new Center for Mason Legacies.

George is actively engaged in research which focuses on local history and in exploring the impact of George Mason and the Mason family upon the region, which includes a digital project focused on publishing the Mason Family Papers and a book focusing on the Mason family.

His book manuscript in progress titled Knowledge in the Age of Revolutions explores the impact of the "information revolution" in the eighteenth and nineteenth centuries for the development of the early republic in the United States. This revolution centered around questions of how to provide access to useful knowledge to the nation's citizenry while also assuring that this knowledge was authentic and promoted the public good.

George is interested in pedagogical issues which focus on the use of sources and in digital history.

“Science, Skepticism, and Societies: The Politics of Knowledge Creation in the Early Republic.” Transactions of the American Philosophical Society FORTHCOMING.

“Growing Strong: The institutional expansion of knowledge in the early republic." In Current Research in Digital History http://crdh.rrchnm.org/

He has recently given presentations at the Virginia Consortium of Early Americanists, the American Historical Association, The American Philosophical Society, and the Southeastern Council of Latin American Studies. 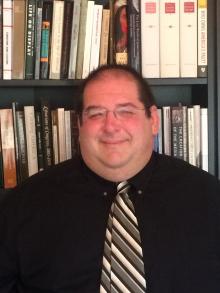