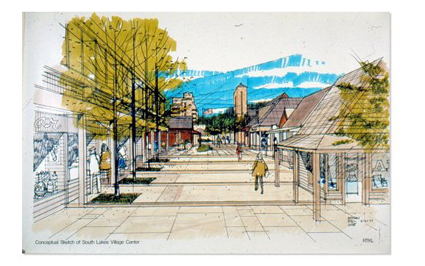 Reston is a “New Town” community, carefully planned to integrate residential and business communities.  It provides residents with all the amenities of a city but with the peace and aesthetic appeal of a small town. Originating more than a century ago in Scandinavia, the idea of the New Town was first introduced to America during the Great Depression, when the Works Progress Administration sponsored the development of the Greenbelt towns. The New Town enjoyed a resurgence of popularity in the second half of the twentieth century. In the 1960s, the planned community movement’s emphasis on “concern for community values” resonated with the protests of many Americans against “cultural conformity, social isolation, unattractiveness, and environmental problems” (10). In 1970, the U.S. Department of Housing and Urban Development founded the Federal New Communities Program, sponsoring the construction of 38 planned communities by 1983.

Founded by the Planned Community Archives, Inc., a nonprofit organization dedicated to improving the quality of urban development in the U.S., the archives contain primary and secondary sources that chronicle the planned community movement worldwide, starting in 1960 and focusing on Reston but also boasting materials on New Towns in Israel, Russia, and France.

The second project funded by the Baum endowment is the acquisition of primary research materials on planned communities or materials in subject areas integral to planned communities, including art history and American architecture, urban planning, conservation, and real estate development and promotion. The primary materials in particular offer insight into the creativity behind Reston’s many visionary features, which include Terraset, the nation’s first earth-covered, solar-heated and cooled elementary school.

Baum remains as committed as ever to Reston’s spirit of invention and cooperation, participating in many aspects of community life. Besides mentoring in I Can, a program organized by the Women’s Center, Baum collects the work of local artists. At the George Mason University Libraries, she's a founding member of and served as the first chair of the Libraries Advisory Board. Baum is a dedicated friend and colleague.