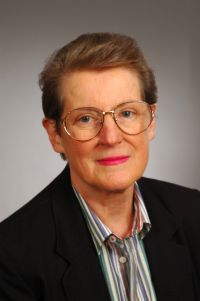 When Carol Litchfield, Professor Emerita in Mason’s Department of Environmental Science and Policy, passed away in 2012, she left her collection of scientific books, journals, and rare imprints to the University Libraries. So extensive was Litchfield’s library that she had rented a separate apartment, where she filled each room with library-standard shelving and filing cabinets.

The Litchfield Collection includes some 180 rare books representing all eras of book production. Over decades, Litchfield collected rare first editions of works by Lazzaro Spallanzani (1729-1799), whose investigations into microscopic life and nutrient cultures formed the groundwork for Louis Pasteur. Dating from 1787 to 1803, the Spallanzani volumes cover some of the most important periods in the physiologist’s career. The collection also contains works by Francesco Redi (1626-97), the poet-turned-scientist who performed one of the first examples of biological experiments with proper controls.

Graduating from Texas A&M University with a doctorate in Organic Chemistry, Litchfield spent several years as a research scientist before joining the microbiology department at Rutgers University, where she taught for ten years (1970-80).  Litchfield joined the Mason faculty in 1993, first teaching in the Department of Biology and later in the Department of Environmental Science and Policy, in which she became Research Professor. Her contributions to the University Libraries record a vigorous history of research and professional activity. In 1996, she donated journals, micrographs, and other research materials on environmental microbiology, helping to form the cornerstone of Mercer Library, which houses a large portion of the Libraries’ science collection.

The Litchfield Microbiology Endowment for the Libraries, which Litchfield established in 2009, will fund the continued preservation and augmentation of the collection that Litchfield so devotedly stewarded for the benefit of Mason students, scholars, and supporters.